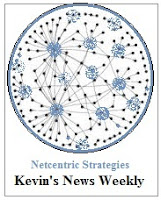 Kevin's Mobile Retailing News Weekly is an online newsletter that is made up of the most interesting news, articles and links related to mobile retailing applications and mobile marketing applications that I run across each week. I am specifically targeting market size and market trend information.

Also read Kevin's Field Mobility News Weekly - Week of January 31, 2011
Also read Kevin’s Mobile Retailing News Weekly - Week of January 24, 2011
Also read Kevin’s Mobile Money News Weekly - Week of January 24, 2011
Also read Kevin’s Mobility News Weekly - Week of January 24, 2011
In 2010 small businesses adopted a number of new technologies such as mobile, group purchasing and location-based marketing as part of their business advertising strategies.  However, social media has quickly risen to the top.  According to the recent Ad-ology 2011 Small Business Marketing Forecast, 46 percent of small businesses plan to increase their marketing spend in 2011, up from 29 percent last year.
http://www.amsterdamprinting.com/Article/Nearly+half+of+small+businesses+to+increase+social+media+spend+in+2011/800367418/Default.aspx
********
In a new report market research firm Gartner forecasts that global mobile app store revenues will triple from $5.2 billion last year to $15 billion in 2011, and keep growing to an astounding $58 billion by 2014.
http://techcrunch.com/2011/01/26/mobile-app-store-15-billion-2011/
********
Groupon recently acquired a small online coupon startup in India called SoSasta (which means “very cheap”).  However, the real leader in India’s digital coupon space is actually SnapDeal, which currently boasts over 1 million subscribers, holding roughly 70 percent of the market share.
http://techcrunch.com/2011/01/25/indias-largest-online-couponing-site-snapdeal-raises-12-million-tctv/
********
A new report released by Forrester Research predicts that marketers will finally allocate sufficient funds into mobile, with an estimated $1 billion in spending for mobile display and search advertising by year end.
http://www.mobilemarketer.com/cms/news/research/8882.html
********
Multimedia Message Service (MMS) adoption has increased significantly and is quickly becoming a focal point for wireless operators.  In 2009 worldwide MMS traffic achieved a year on year growth rate of 48 percent, Portio Research reported.  In the United States, 34.5 billion MMS messages were sent/received in 2009, compared to 14.9 billion in 2008, according to CTIA-The Wireless Association.
http://www.wirelessweek.com/Articles/2011/01/MMS-Prosper-Mobile-Marketing-Mainstream-Business/
********
The United States and South Africa have both experienced four consecutive quarters of double digit growth in mobile advertising traffic, according to global mobile media company BuzzCity.  The company’s Global Mobile Advertising Index for the fourth quarter of 2010 revealed a quarter on quarter increase in mobile advertising of 12 percent, with 93 percent more ads delivered in 2010 compared to 2009.
http://www.mobilemarketer.com/cms/news/ad-networks/8899.html
********
Smartsoft Mobile empowers some of the world’s largest multi-national organizations to extend and improve business processes by providing mobile solutions to their employees and customers. Smartsoft has more than 700 experienced ERP/mobile consultants with over 5,000 man years of experience helping 400,000 plus mobile users achieve their business goals with powerful mobile B2B and B2C applications, designed and developed specifically for today’s popular consumer and industrial grade mobile devices. For more information please visit, http://www.smartsoftmobile.com/.  This newsletter is sponsored in part by Smartsoft Mobile Solutions.
********
With millions of mobile phones in use around the world, the potential to communicate with current and future clients is limitless. Small business owners can use both SMS (short text messaging) and MMS (multi-media text messaging), which can add video and audio files to messages sent to clients.
http://www.miamiherald.com/2011/01/24/2030558/is-mobile-marketing-right-for.html
********
Viewers of Super Bowl XLV on February 6 will be using their mobile devices while they watch the game and the much buzzed about commercials.  How can marketers reach that connected audience?  Consumers will text their friends throughout the game, and users of smartphones and tablets may watch live streaming music and video online and upload comments and content to social media sites such as Facebook and Twitter.  The bottom line is that viewers will be connected on Super Bowl Sunday via their mobile devices, which presents a unique opportunity for marketers.
http://www.mobilemarketer.com/cms/news/media/8916.html
********
Just 8 percent of 1,546 consumers surveyed in the United Kingdom said they want to receive a mobile coupon while they are in a supermarket, according to research by U.K. based company Evolution Insights.  Conversely, 51 percent said they were fine with receiving mobile coupons before entering the grocery store.
http://www.clickz.com/clickz/news/1936791/-grocery-shoppers-location-coupons
********
British retail giants Marks & Spencer and House of Fraser are distributing location-based mobile coupons to opted in O2 subscribers.  The retailers are using the “You Are Here” location-based mobile marketing service from Telefonica’s O2, the second largest carrier in Britain.  O2 customers receive messages from their favorite brands when they enter an area near a store.
http://voicendata.ciol.com/content/news/111012802.asp
********
Almost half of the ads in mobile apps are clicked on by accident, according to a recent survey.  Online polling firm Harris Interactive, in conjunction with lead generation firm Pontiflex, surveyed over 4,000 adults in the U.S. last month and found that mobile users click or tap on ads inadvertently 47 percent of the time.
http://www.informationweek.com/news/software/bi/showArticle.jhtml?articleID=229200047&cid=RSSfeed_IWK_All
********
Analysts at Deutsche Bank say they are "highly optimistic" on the prospects for mobile advertising in 2011, and expect it to become a billion dollar segment (up from $400 million to $500 million in 2010).
http://ipcommunications.tmcnet.com/topics/ip-communications/articles/137551-2011-online-ad-growth-forecast-optimistic.htm
********
Forrester's 2008 forecast put media spending for mobile display ads and search at $561 million in 2010.  Last year the research firm increased that prediction to $815.9 million. Analysts at the research firm might not have known at the time they wrote the report that Apple has begun to work with NFC, adding one more tech and media powerhouse to the mix of companies that will likely integrate the technology into their mobile phones and devices.
http://www.mediapost.com/publications/?fa=Articles.showArticle&art_aid=143587
********
Leading online advertising channels look set to record double digit growth in 2011, according to new research from Deutsche Bank.  Pay per click and display advertising are both forecast to grow by as much as 11 percent, according to online marketing companies which were surveyed by the German bank.  According to the findings, growth is likely to continue at similar rates every year until 2015.
http://www.lakestarmedia.com/news/1010/online-advertising-growth-forecast-to-stay-strong-to-2015/
********
Kevin Benedict, SAP Mentor, SAP Top Contributor, mobile industry analyst and experienced mobile industry executive, offers both one and two day onsite workshops designed to educate and inform executives and management teams on enterprise mobility and mobile strategies for businesses. This workshop is designed to provide a complete overview of enterprise mobility and what it means to the business. The workshop is customized based upon the needs of participants. For more details, visit http://mobileenterprisestrategies.blogspot.com/p/workshops.html.
Recent Articles by Kevin Benedict

********
I have added a feature to my blog site that supports email subscriptions. You can now receive all blog articles directly via email. If you are interested, click here.