Information as a Weapon 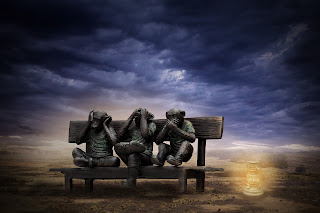 There are many important subjects and debates worth considering today including the merits of globalization, economic systems, freedom, equality, personal dignity, pluralism, human rights, politics, morality, peace and our future.  All of these important discussions are informed by information.  As such, how to find, capture, validate, weigh and authenticate information is critical to our societies' futures.
Just today, I read how TikTok has stopped information from outside of Russia from being viewed by Russian users.  That means Russian users get only a one-sided, Russian view of the war in Ukraine.  A biased, one-sided view does not support rational, balanced perspectives and objective decision-making.  The same challenge arises if any of us limit our news and information to only one perspective.
My wife insists on reading news from a wide variety of sources, even sources she most often disagrees with.  I hear her grumbling when she reads, but she adamantly defends the need to include a plethora of viewpoints in order to gain perspective.  She is a wise lady.
Information, even if true, can be manipulated, and because of that it is critical to understand how.  Has anyone ever said to you, "Now is not the time?"  The timing of when information is given can impact the emotional response a person has when information is shared.  Information shared by three different sources on the same day can increase the impact of the information, true or not.  A magician can hold up 3 playing cards and ask you to choose one, even though the card deck has 49 other cards in it.  It is a way of limiting and manipulating decision-making choices.  Social engineers do that to large audiences as well.
CNN recently reported on how Western governments are working together in an information warfare campaign against Russia by intentionally, "painting a picture of a bogged down, demoralized and dysfunctional Russian military taking disastrous losses on the battlefield, and are simultaneously conjuring a vision of growing political tension inside the Kremlin."  True or not, these are impressions purposefully promoted to influence the thinking of specific audiences.  It is an example of information being weaponized.
I also read this week in the New York Times, that the Ukraine is sending emails to Russian men sympathizing with their newly imposed military draft, "Over the last two weeks, a group of Ukrainian activists, government officials and think tanks, called the Information Strategies Council of Ukraine, has sent emails and social media messages to 15 million Russian men of draft age, between 18 and 27."   This sophisticated campaign, targets only men of draft age, at a time when they are likely fearful of receiving draft notices.  This is another example of information being weaponized to purposely introduce a desired emotional response.
Information and disinformation are being weaponized everywhere today.  As this has been found to be an effective and cost effective way of influencing the unaware, it is likely to continue or even get worse in the future.  For this reason it is more important that ever that our educational system, parents, mentors and caregivers help train our vulnerable on how to improve their ability to process information in a way that maximizes their ability to find truth, and to recognize when information has been weaponized to influence them.
The following list includes strategies, tactics and techniques professional influencers use to trick, influence and misinform the vulnerable.
These influence and information weapons are being used on us daily.  They are specifically targeting the vulnerable and unaware.  It is unlikely we will be able to stop these influence campaigns from targeting us in a free society, but we can certainly do a better job of educating and training the vulnerable to reduce the numbers of "unaware."
Thoughts?
************************************************************************
Kevin Benedict
Partner | Futurist at TCS
View my profile on LinkedIn
Follow me on Twitter @krbenedict
Join the Linkedin Group Digital Intelligence