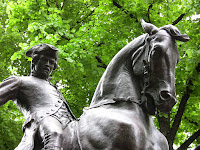 Recently anti-mask and anti-testing activist, using mobile phones, video and social media platforms, called for a flash mob style protest at the Legacy Salmon Creek Medical Center emergency room in Vancouver, Washington.  They were protesting against the hospital's requirements that patients be tested for Covid-19 upon entering the hospital.
The anti-maskers that organized the 15-20 person flash mob protest stated their goal was to be able to "push a button on their mobile phone" and send information that would summon 10 activists in 10 minutes, 100 in 100 minutes and 1,000 in 1,000 minutes."  A speed they hoped would be fast enough to surprise the targets of their protest.
That got me thinking about information and "summoning" speed.   I wondered how long it took the American colonists to distribute information and summon their militia to meet the British in Lexington, Massachusetts on April 19, 1775?
Here is what my research found.  Paul Revere's 12.5 mile ride on a horseback to warn the colonists that the British were coming took approximately one hour.  Paul arrived in Lexington about 12:30 AM on April 19.
Once the colonist received the warning information that the "British were coming!" they got dressed, grabbed their weapons and ran, walked or rode their horses to meet the British in Lexington.  The "shot heard around the world" was fired just after dawn in Lexington.  Based on these records it appears it took around 6 hours to distribute information and summon 500 colonial militia to confront the British. 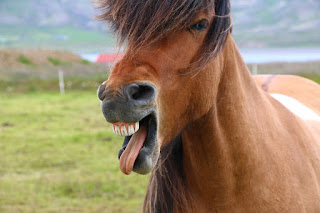 One of the anti-maskers stated goals was the ability to summon 1,000 protesters in 1,000 minutes (16 hours). With today's social media, internet and mobile devices is that a stretch goal? In about 6 hours the American colonists had gathered approximately 500 militia, and the information was distributed on horseback.
At least in this instance, it appears Paul Revere's team and their horses beat the "summoning" speed goals of today's anti-maskers.  Paul's team was able to carry information out and summon more people at a faster rate.
I recognize this certainly will not always be the case, but that doesn't stop us from enjoying this bit of silly trivia.
Don't forget to subscribe or follow me if you want more silly trivia, plus not so silly discussions on the future.
************************************************************************
Kevin Benedict
Partner | Futurist | Leadership Strategies at TCS
View my profile on LinkedIn
Follow me on Twitter @krbenedict
Join the Linkedin Group Digital Intelligence