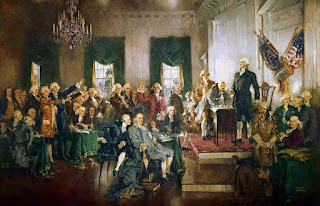 The preamble to the United States constitution is so 1787.  Back then our founding fathers wanted important decisions about our nation's future to be decided by "We the people."  Today, however, we have opted to let social media and big tech companies make some of our most important societal decisions without us.  I'm quite certain that is not what our founding fathers intended.
Here is a excerpt from an article in the New York Times today, "The social network [Facebook] announced on Wednesday that it had started changing its algorithm to reduce the political content in users’ news feeds. The less political feed will be tested on a fraction of Facebook’s users in Canada, Brazil and Indonesia beginning this week, and will be expanded to the United States in the coming weeks, the company said."
Now let's be clear, I quit Facebook because of their "agitation engine."  I am no fan of fighting with friends and family on Facebook over politics, there are so many other things we can fight about.  But what I am reading here is that Facebook is going to use the humans in Canada, Brazil and Indonesia as test guinea pigs, and research how much politics they should be fed.  Once they have the optimal amount determined, Facebook will apply their algorithms to the humans in the United States.  Does that sound just a bit wrong to you?
To continue, “During these initial tests we’ll explore a variety of ways to rank political content in people’s feeds using different signals, and then decide on the approaches we’ll use going forward,” Aastha Gupta, a Facebook product management director, wrote in a blog post announcing the test."
Good for Facebook for trying to rehabilitate themselves after taking our country and others to the brink of civil war through their amplification and promotion of agitation and disinformation.  But isn't the choice of what "We the people..." hear, read and see our decision?  When did "We the people..." grant Facebook the right to decide what information and politics goes into our minds?  I don't remember making that decision. Somewhere along our society's digital transformation journey we failed.  We simply let our responsibility slip from our hands and social media platforms were there to fill the vacuum.
The most concerning parts of Facebook's statements are the fact "they" will explore a variety of ways...and then decide on the approaches they will use going forward."  What role do, "We the people..." get to play in this decision? Should we really be letting social media platforms decide these major societal decisions of our generation without our input?
I understand that some would say Facebook, as a private commercial company, can make those decisions on their own, but isn't there an argument that once a company gets so big that it controls the information flow of a society it then has additional obligations and responsibilities to it?
Read more on the Future of Information, Truth and Influence here:
*https://www.nytimes.com/2021/02/10/technology/facebook-reduces-politics-feeds.html?referringSource=highlightShare
************************************************************************
Kevin Benedict
Partner | Futurist | Leadership Strategies at TCS
View my profile on LinkedIn
Follow me on Twitter @krbenedict
Join the Linkedin Group Digital Intelligence