The Future of Human Experiences (HX)

I have a confession.  Although my family would have been considered working poor (my dad worked odd jobs in construction, sawmills and factories), I was able to attend a university, pay my tuition by working on a dairy farm and graduate.  This ultimately opened doors to membership among the "elite" by way of a college degree and a job with a living wage.
It is easy to forget the struggles of one's past when life has moved on.  It's easy to assume our personal experiences are representative of most.  My recent research, however, has revealed this to be untrue.  In many parts of America, there are macro and micro-economic forces and trends that are negatively impacting life opportunities, careers, hope and the quality of the human experience.
When a customer complains of bad customer service, how should the business respond?  Apologize, empathize and ensure it doesn't happen again.  If businesses ignore these complaints they will quickly suffer the results.  It's not too dissimilar when it comes to leading and/or governing constituents.  Citizens also have experiences on a spectrum of good to bad.  These human experiences make up a person's quality of life and are critically important to them.
Businesses cannot thrive, if their customers aren't thriving.  Countries can't thrive, if their citizens are not thriving.  What follows is a look at the human experience from the perspective of the less educated and underemployed workers in America. 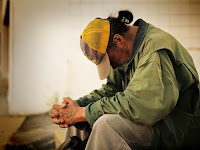 First, we cannot begin to understand the minds and actions of large numbers of American workers without first understanding there are two different Americas, one made up of a less educated or under-employed workforce suffering through deindustrialization, economic pain, reduced opportunities and community decay, while the other consists of highly educated, advantaged and elite individuals experiencing rapid wage increases and fortuitous and abundant career opportunities.
For many Americans, deindustrialization has reduced the quality of their human experience.  Many experience delayed and strained marriages, broken and delayed families, poor physical and mental health, addictions, diminished local economies, and even a reduced sense of worth, status, purpose and hope.  What is causing these declines in fortune?  Let’s take a look at deindustrialization, technological innovations and some additional variables that have worked symbiotically to create these unfortunate human experiences.
This necessarily incomplete list goes a long way to explaining why many workers have legitimate concerns, struggles, grievances and increasing levels of resentment.  Resentment is a destructive emotion that is “felt again,” and again. Anger can flare up and burn out, but resentment lingers. Resentful people don’t forgive or forget.  They often feel others are out to destroy their sense of self-worth and status, and will resist with all their strength.  Resentment is intensely powerful, destructive and unpredictable – like a tsunami or an earthquake.
If technology is not serving the common good and improving our human experience now and in the future, then it might be time to rethink our approach to be more inclusive and purposeful.
************************************************************************
Kevin Benedict
Partner | Futurist at TCS
View my profile on LinkedIn
Follow me on Twitter @krbenedict
Join the Linkedin Group Digital Intelligence