The Future, Complexity and Human Thinking

Don't let me drive a motorized vehicle after writing a long article.  In fact, don't let me drive any vehicle motorized or not.  My brain is often deep down a rabbit hole pondering data, crafting logical arguments, analyzing research findings, storytelling, wordsmithing etc, and any remaining brain cycles are not enough to drive safely. If my brain capacity can be nearly consumed while just sitting at a desk, think about the brain cycles consumed by pilots flying modern fighter jets in combat!
Modern fighter pilots have a plethora of onboard sensors that collect and stream massive volumes of data every second. The object of so many sensors is to give our pilots more information at a faster rate in order to achieve competitive advantages over adversaries. Too much information, however, is debilitating.  That is the reason the task of flying will increasingly be handed over to robotic, AI-powered pilots, so humans can use their limited brain capacity to focus on assignments with a slower tempo - like accomplishing the overall mission. 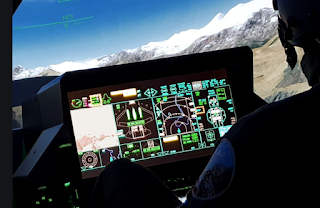 In order for jet fighter pilots to understand all the data pouring in, special helmets and UXs were designed to dumb down and slow down the need for human analysis.  Even with simplified user interfaces, pilots reported they struggled with information overload.   That is why the role of future military pilots is quickly evolving away from flying aircraft to operating flying command and control centers.
The massive rivers of data that keeps an aircraft flying has reached the level where humans are incapable of processing it fast enough to be successful.  In fact the F-35 is said to be unflyable without AI.  We now have reached the human thinking version of the sound barrier.  To push through and beyond it we will need AI augmentation to expand and extend our mental processing power.
Human brains, as impressive and powerful as they are, are limited and vulnerable.  We can easily become worried, fearful, overwhelmed, overburdened, stressed-out and distracted.  Our enemies understand this and engage us in social engineering, and mental “saturation” attacks - a military tactic in which an opponent hopes to gain an advantage by mentally overwhelming an adversary with complexity.  Humans are soft targets and vulnerable against these types of attacks.  As I have previously written  humans can be easily influenced by both overt and covert mind manipulation.  To expand our thinking beyond today's limitations, we must recognize first how our brains work best, and then use AI to take us beyond those boundaries.
Today, any combination of large amounts of data, complexity and quick decision-making requirements easily cause us to hit our limits.  It happens to our business leaders. As a result we must help our leaders focus their thinking on what human-leaders can do best, and automate or remove the rest.   We should not expect our leaders to know and manage everything, and we should give them permission to limit their focus to accomplishing a much smaller set of responsibilities and purpose.

In WWI, when planes were in their infancy, the crazy and brave pilots that flew them had only a handful of gauges to watch.  The rest of the time they were searching the skies, admiring the clouds and watching activities on the ground  As we discussed earlier in this article the F-35 has such huge volumes of data streaming in every second, that it overwhelms the pilots and requires AI and 8.6 million lines of code to handle it. This trend is not going away.  In every industry today the volume of data is exponentially expanding and it is quickly jumping the barrier of humans' capabilities to ponder it all.  This trend is clearly reflected in a recent request by the U.S. Air Force for "enabling technologies that support "fast" attack planning on valuable targets that offer only "fleeting" time windows."  Humans cannot think fast enough to respond to "fast planning' and "fleeting time" windows.  To be successful, it takes AI, very fast computer processing, analytics and algorithms to meet these requirements.  The business world, although not usually as lethal of an environment, will face many similar capability requests that the military is facing now and in the future.
Read more on the Future of Information, Truth and Influence here:
************************************************************************
Kevin Benedict
Partner | Futurist at TCS
View my profile on LinkedIn
Follow me on Twitter @krbenedict
Join the Linkedin Group Digital Intelligence