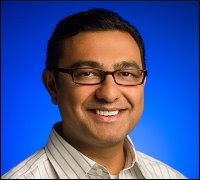 That was the sentiment expressed by Vic Gundotra, vice president of mobile and developer platforms at Google, who spoke on a panel at the Morgan Stanley Technology Conference in San Francisco this week. Applications like gmail live in the world of cloud computing which means they are less impacted by the various mobile operating systems so although they have skin in the game, they can win no matter the users mobile operating system preferences.

Even Google says it cannot afford to develop different versions of the same mobile applications for all the various mobile operating systems. Their strategy is to develop applications for the "cloud-based" platforms and then make them accessible to all the different mobile handheld PDAs and Smartphones via the internet.

There is still a lot of excitement around internet-centric mobile handhelds and Smartphones even in today's economy says Gundotra. Why? He attributes it to the mobile phones' transition to personal computing devices.

Google's strategy has implications for a lot of mobile software companies and should influence where they spend their R&D budgets in the future.