Future of Warfare and Its Gamification

Technology is giving life the potential to flourish like never before - or to self destruct. ~ Future of Life Institute

In the future, warfare will be fought increasingly by engineers, software developers, scientists, accountants and politicians, which is a historical anomaly and worth some consideration.
Historically war was conducted to compel a positive political outcome for the victor.  This was accomplished by diminishing an adversaries will, or resolve to fight by making them suffer.  Once an adversary suffered enough and they lost their will to continue - peace was achieved on the terms of the victor.  Here is where the entire twisted logic of war and violence breaks down.  In the future, warfare is likely to be increasingly fought between machines that don't suffer.  They just do it - as Nike advocated.
Just about everything the defense industry is asking from technologists today involves reducing the numbers of humans needed in combat in order to keep them further away from the danger zone and potential suffering.  For example, this week DARPA shared they want more artificial intelligence for integrating unmanned ground force operations, consisting of ground robots and ground robotic combat systems to operate alongside warfighters.  These ground robots combine hundreds of different sensor feeds into decision-making and acting algorithms.  The machines can do this all without ever suffering. 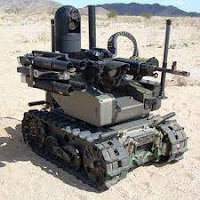 Doug Patterson, a VP at AiTech Defense Systems Inc., recently said the trend today is to reduce the number of humans needed in military vehicles.  For example the US army wants to transition from a three-man crew in a main battle tank to a two-man crew.  In place of the third human they would add more electronics and AI.  The end result would be that more warfighters would be withdrawn from the battlefield and replaced by more AI, and increasingly by more unmanned combat vehicles.
Col. Bryan McVeigh, military deputy director of the U.S. Army Tank Automotive Research, Development, and Engineering Center (TARDEC) was recently quoted as saying, "We can do more with less because our technologies have matured to such a degree... We’re taking soldiers out of harm’s way (thus reducing suffering) by adding electronics, computer capability, and systems engineering."

Using less humans in combat situations has been in the works for sometime now.  The US military has been discussing the concept of a "Revolution in Military Affairs (RMA)" for over 30 years.  It was supposed to be the new way of fighting war in which it is possible to achieve the effects of using large armies with many warfighters, without the actual use of large armies and many warfighters (humans).  Using more machines to fight on our behalf seems to accomplish the goals of RMA, but if both sides remove their warfighters and send machines without the ability to experience suffering, will or resolve into the field to fight, does that really accomplish anything?
One of Clausewitz's most famous aphorisms is "War is the continuation of politics by other means."  Will sending machines to fight machines in the field of battle really accomplish any significant political aim, or is it simply a twisted episode of the battle of the bots reality game show?

RMA includes the idea of "Effects-Based Operations," which means that success in armed conflict should be measured by results, not by destruction. In other words, did the operation compel a positive political outcome?  Again I wonder if machines fighting machines will really accomplish this?  Will accountants keep a spreadsheet of which machine did what to an opponent's machine and how much it will cost to repair it?  Will that create enough suffering to diminish one side's resolve and will to continue?
War is violence to achieve a political objective.  None of us are going to attend memorial services for machines, or sue for peace because our machines were disabled.  It's only when machines are unleashed on humans causing suffering that the resolve and will of nations and organizations will be challenged, and since fewer and fewer humans are going to be on the battlefield, the machines must seek humans in other locations to create suffering.  Yikes!
Instead of a nation wondering if a particular conflict justifies the suffering and lives of a generation of their youth, accountants and politicians will be analysing if they can afford more machines to send into battle.  An arms race focused on creating more lethal and capable machines is inevitable.  The race will also involve the continued reduction in human warfighters on the battlefield leaving it to the machines to impose suffering on humans elsewhere to accomplish their "political" purpose.
This is a nightmare scenario.  How did we allow ourselves to get here? How can we change this trajectory?
Thoughts?
************************************************************************
Kevin Benedict
Partner | Futurist at TCS
View my profile on LinkedIn
Follow me on Twitter @krbenedict
Join the Linkedin Group Digital Intelligence