Convergence, Combinations and Challenges in the Future

I first read about futurist Frank Diana's concept of combinatorial technologies several years ago. He wrote, "We are seeing exponential convergence across the areas of science, technology, economics, society, ethics, and politics. The combinatorial nature of an overwhelming number of building blocks drives an accelerating intersection across these areas.  As an expert Lego player, I can appreciate the concept of building blocks, and the near infinite number of combinations these blocks can be used to form.  The idea that we have now reached a critical mass of digital building blocks, and that we are now experiencing exponential growth through the combinatorial nature of them is compelling. 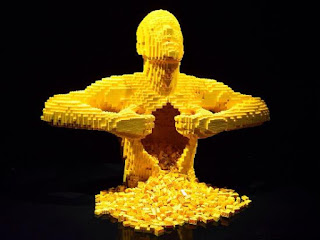 The World Economic Forum described the future in similar ways, “We stand on the brink of a technological revolution that will fundamentally alter the way we live, work, and relate to one another. In its scale, scope, and complexity, the transformation will be unlike anything humankind has experienced before... Billions of people are now connected by mobile devices, with unprecedented processing power, storage capacity, and access to knowledge.  And these possibilities are being multiplied by breakthroughs in artificial intelligence, robotics, the Internet of Things, autonomous vehicles, 3D printing, nanotechnology, biotechnology, materials science, energy storage, and quantum computing."
Both of these quotes, and the idea that we have reached a new era as a result of the combinatorial nature of digital building blocks, begs the question of what does this mean for our organizations today?  The answers can be found in the simple Lego block.
Legos come in standardized shapes, sizes and integration points that allow for us to rapidly build billions of different combinations.  The standardization of Lego blocks doesn't restrict our ability to create new and unique combinations, rather it enhances it.
We must all recognize that the winners of today and tomorrow are not organizations that create their own bespoke building blocks, but rather the ones that have a vision to use standardized digital building blocks to offer unique combinations faster than their opponents.  That is where ecosystems play a role.
Ecosystems often form around a digital platform.  Think about the Amazon ecosystem.  Hundreds of different kinds of businesses and services have formed to take advantage of the building blocks Amazon has already developed and made available.
The future is impossible to predict, but as mentioned earlier we do know that it will consist of the convergence of science, economics, society, ethics, and politics and a whole lot of different combinations of existing and new technologies.  Our challenge is to watch for the signals that will help us recognize which possible future scenarios are developing and which are fading.
As we watch these possible future scenarios, it is helpful to practice a sense and respond approach.  Sense how possible future scenarios are evolving and respond and plan accordingly.
************************************************************************
Kevin Benedict
Partner | Futurist at TCS
View my profile on LinkedIn
Follow me on Twitter @krbenedict
Join the Linkedin Group Digital Intelligence